The promised benefits of C8 products are many. They include increased blood ketone levels and associated reduction in blood glucose levels, increased energy, reduced body-fat, antimicrobial activity and even reduced risk of certain metabolic diseases. But what exactly is C8 and how does it compare to C8/C10 products?

Caprylic acid (C8) has 8 carbons and is falls into the MCT category. For this reason it is also often referred to as C8 MCT. You find C8 MCT in food products like coconut, palm and butter.

C8 MCT has fewer carbons (8 carbons) compared to capric acid (C10) and lauric acid (C12). This is noteworthy because it is likely behind its better ketone-producing profile than these longer carbon MCTs.

C8 MCT products are sourced from palm and coconut oils by removing the other fatty acids from them. The result is an oil composed of only caprylic acid.

Something to consider is that most MCT oil products are generally a mixture of caprylic acid and capric / decanoic acid (C10) and sometimes lauric acid (C12). The exact ratio of each varies by product and typically contains between 50 to 75% caprylic acid).

MCT oil has accumulated a healthy amount of research in peer-reviewed literature over the past few decades, and it is safe to assume that many of its benefits are derived from caprylic acid (since caprylic acid generally constitutes the majority / 50% of the mixture). That being said, MCT products are not identical to pure caprylic acid products so be careful not to confuse the two.

It’s worth noting that the lowest carbon MCT, Caproic acid (C6), may be more effective at raising ketone levels than C8. This may be due to its lower carbon number. The current evidence to this is research showing that it induces higher ketone levels in animals than the other MCT oils.

Currently C6 MCT oil products are not available. C6 is generally excluded from MCT oil, because it is such a small component in palm and coconut oil products. Unlike C8, high quantities are not found in coconut and palm oils.

Instead C6 is found in greatest quantities in various animal fats.1

What is & What Isn’t Caprylic Acid? Clearing Up Naming Confusion

Several different names are commonly used to refer to Caprylic Acid (C8). This creates a lot of confusion, as they are not identical.

Caprylic acid’s hydrocarbon chain contains 8 carbon atoms, so it is often referred to as C8 or octanoic acid. Octo, of course, referring to the number

The C8 found in MCT oil products is derived from triglycerides so it is common to see the term caprylic triglyceride.

Even a modest increase of 1mMol in plasma caprylic acid levels was shown to increase ketone body production by five folds. Intuitively this is just what keto dieters would want since ketones are their primary source of energy.

Moreover, despite the presence of moderate amounts of blood glucose

(such as when you’ve been eating carbohydrates or higher amounts of protein), caprylic acid is still readily absorbed from the gastrointestinal tract and rapidly oxidized.4

This means the C8 is converted into ketones regardless of whether you are in ketosis and following a ketogenic diet or not. However, the scientific research is still at an early stage, it is not clear yet what long-term effect elevated ketone levels when combined with a carbohydrate rich diet has on human physiology.

Other research has demonstrated that caprylic acid does indeed have strong antibacterial, antiviral, and anti-fungal activities,5 and has also been shown to improve blood lipid profiles of hypertensive rats, though data in humans remains limited.6

However, there is little evidence supporting the postulation that caprylic acid is superior to a mixture of medium-chain fatty acids in reducing body fat. Research on the performance-enhancing benefits of caprylic acid is also limited at this time, so hopefully, this will be explored in future studies.

Something to consider is that most MCT oil products are generally a mixture of caprylic acid and capric / decanoic acid (C10) and sometimes lauric acid (C12). The exact ratio of each varies by product and typically contains between 50 to 75% caprylic acid).

Starting out on Keto? Try our MCT Oil. Skip the "diet-flu" and get straight back at losing weight! 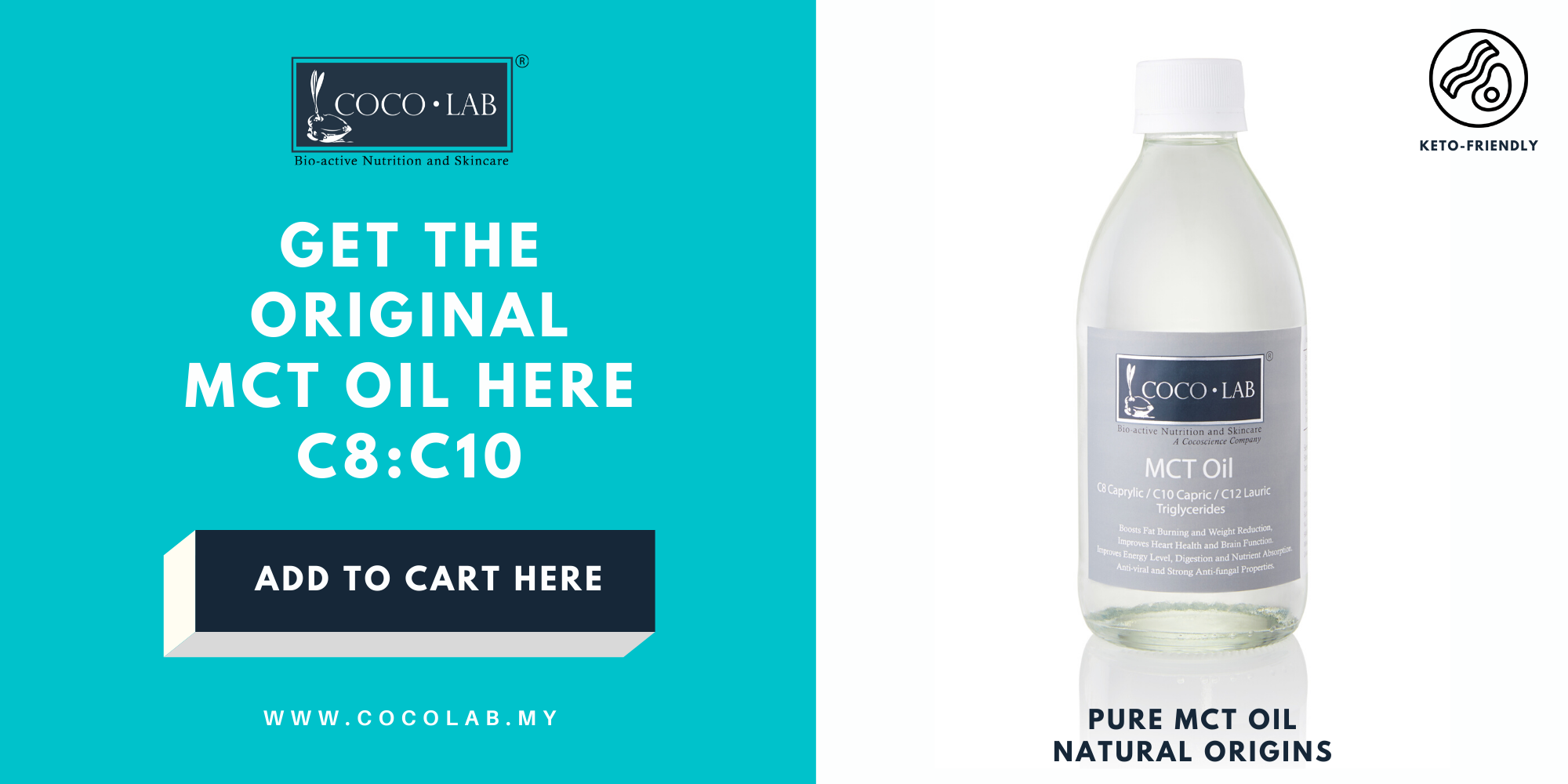 MCT oil has accumulated a healthy amount of research in peer-reviewed literature over the past few decades, and it is safe to assume that many of its benefits are derived from caprylic acid (since caprylic acid generally constitutes the majority / 50% of the mixture). That being said, MCT products are not identical to pure caprylic acid products so be careful not to confuse the two.

Note: Values in chart are averages for product type. Coconut oils and palm oils differ in fatty acid makeup according to location sourced from and farming, while MCT oil products differ based on refinement process used and quality goals of product manufacturers.

C8 products are essentially a refined version of MCT oils that have had the capric acid (C10) and lauric acid (C12) removed out, leaving only caprylic acid as the fatty acid component.

This is thought to improve gastro-intestinal (GI) tolerability, a significant inconvenience associated with MCT oil (i.e. GI distress, indigestion, and diarrhea can result for the less experienced or if doses over a tablespoon are taken). Caprylic acid has a shorter hydrocarbon chain than capric and lauric acids, and thus seems to pass through the GI tract quicker and so is rapidly shuttled out to the liver for enzyme metabolism. This may help to reduce the GI distress issue experienced with MCT oils.

The following graph is a clear representation of the difference between caprylic acid (C8), capric acid (C10), coconut oil (CO) and MCT oil (C8/C10) on the total plasma ketone levels over an 8-hour period. C8 increases ketones by approximately 3 times more than C10.

This research would suggest that caprylic acid is the main contributor to elevated plasma ketone levels in MCT oil (C8/C10). C10 shows little improvement compared to coconut oil and the control sample.

It is also worth noting that all samples taken on an empty stomach ( i.e. taken without food) had a marked improvement in plasma ketone levels when compared to the samples taken with breakfast (i.e. with a meal).

How & When to Use Caprylic Acid

To maximize the potential benefits of using Caprylic Acid follow these guidelines:

Caprylic Acid Dosage: How Much Should You Use?

Generally, one to two tablespoons (15 – 30mL) of pure caprylic acid oil at a time is sufficient.8 Some individuals will go up to three tablespoons at a time, but the added benefits of such a high dose at one time are questionable; it would be ideal to spread several modest doses over the day as opposed to “loading” at one time. 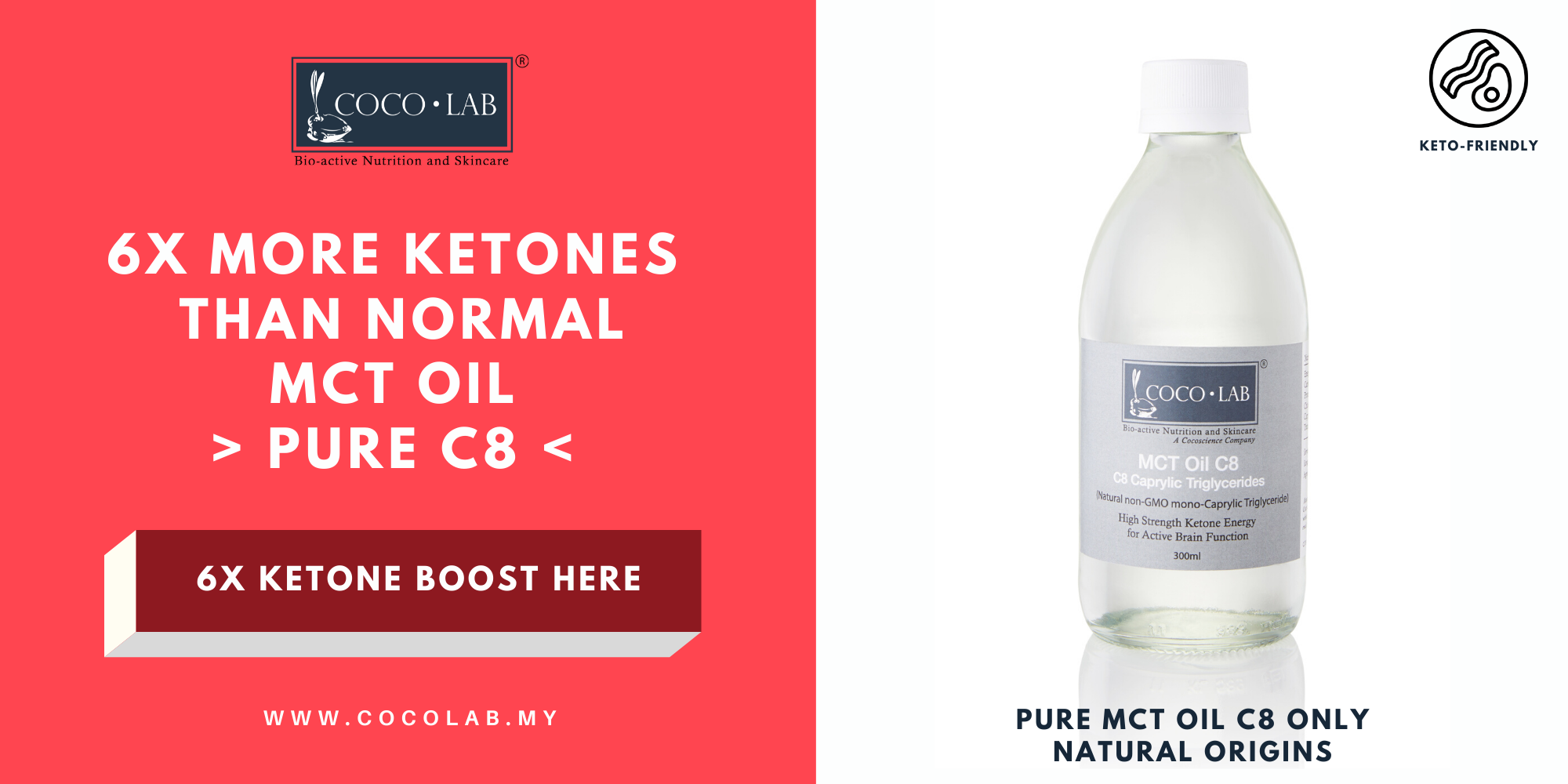 Caprylic acid (C8) is a substrate that shows promising potential for individuals following a keto diet.

However, more research is needed to confirm whether or not many of the metabolic health benefits derived from MCT oil (such as reduction of abdominal fat and performance enhancement benefits) are mediated mostly or solely by caprylic acid rather than the other fatty acids.

Look no further when it comes to your C8 solution. At COCOLAB, we produce 100% Pure C8 Oil (Caprylic Triglyceride) with double the keto benefits! Made from all natural non-GMO origins, this is your solution to high strength ketone energy, for the body and mind!

Our MCT Oil C8 is the best boost up for increased ketone levels in every tablespoon. Try it today here. Always on the go? Make our MCT C8 Oil Sachets your preferred option here. 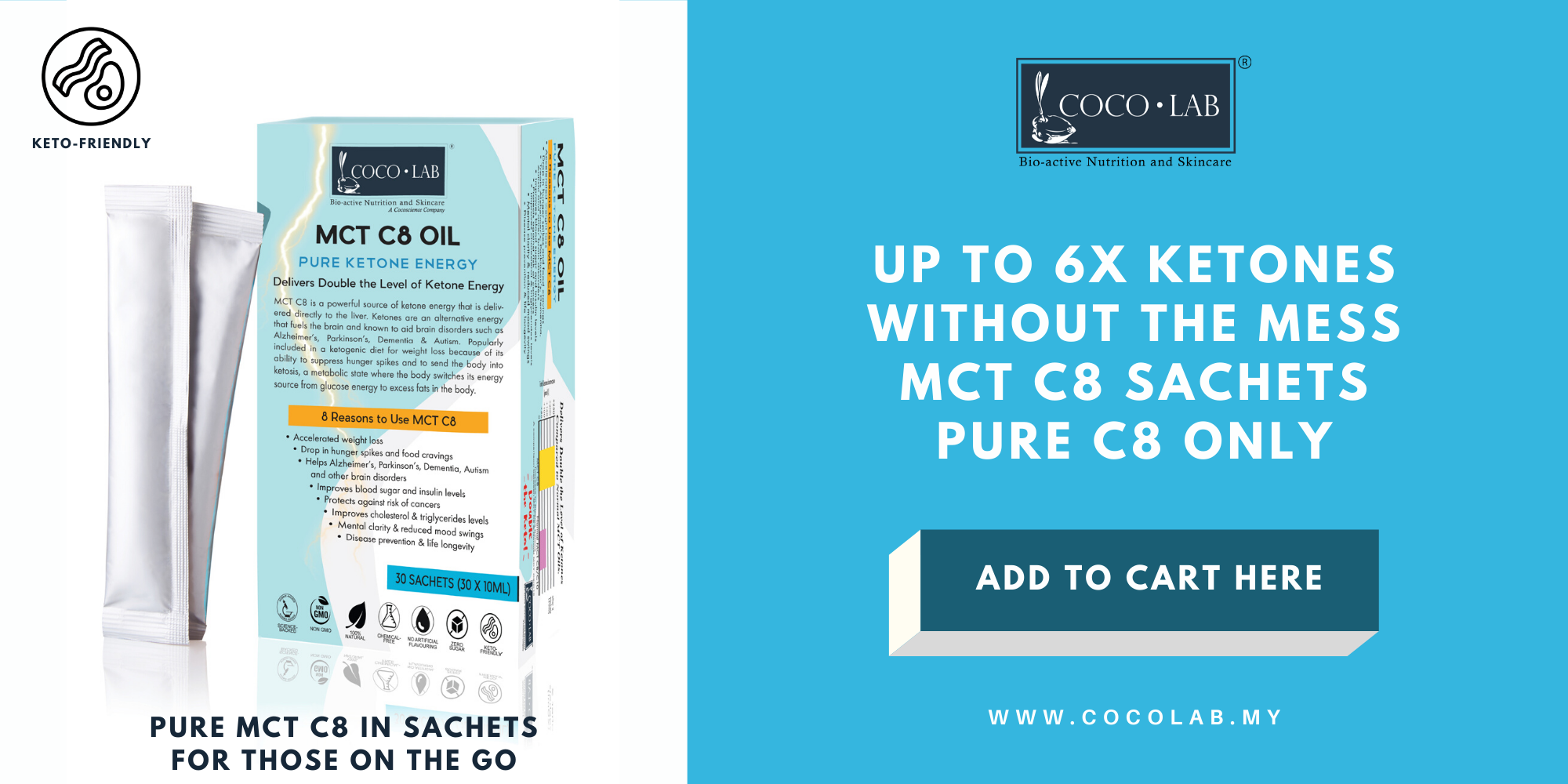 For those with a sensitive stomach, try the MCT C8 Powder for less gastrointestinal distress. 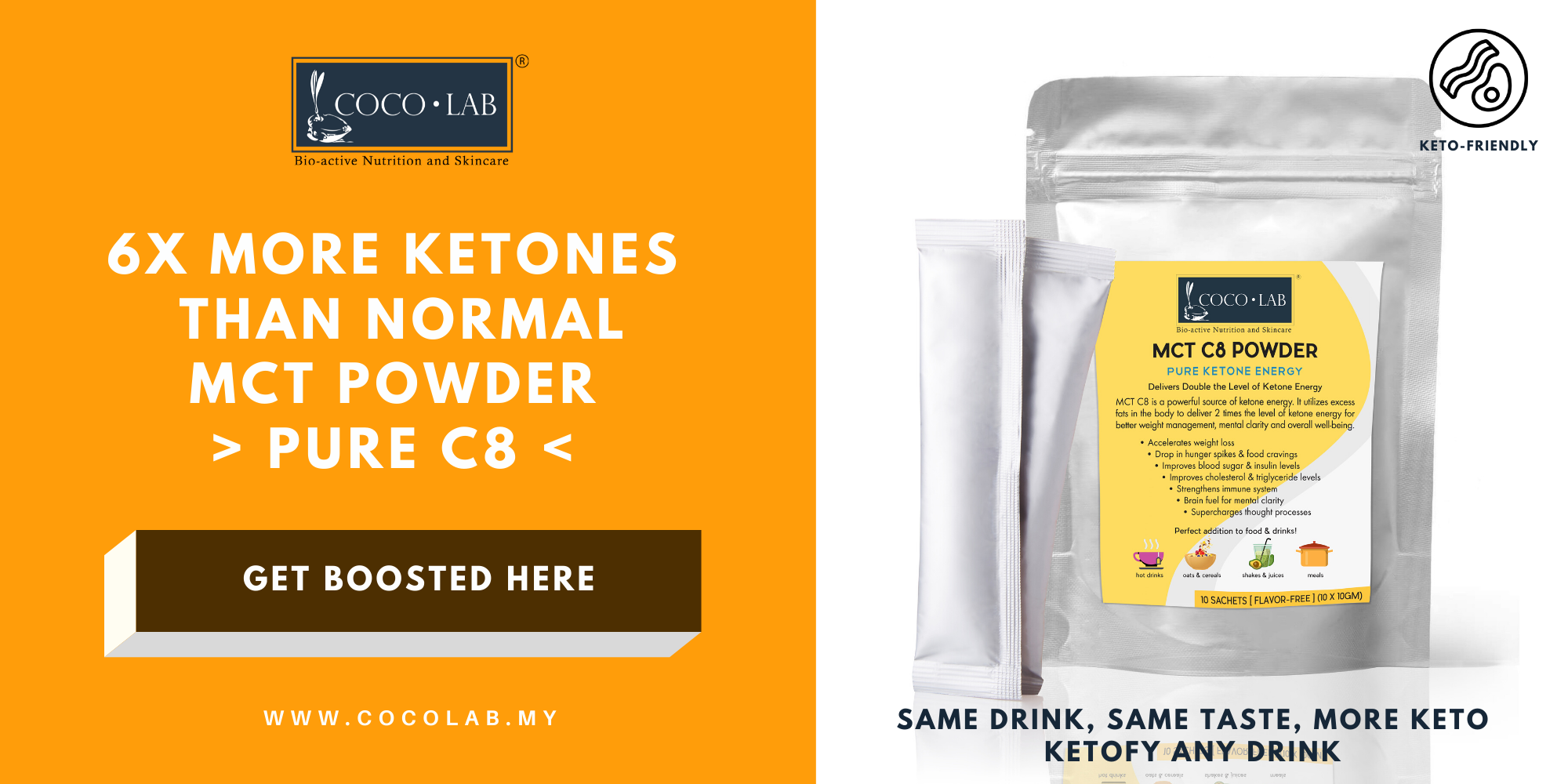 Coffee Lovers we hear you and you'll love our instant Keto8 Coffee made with pure MCT C8. Perfect for a fuss-free morning and instant energy boost. 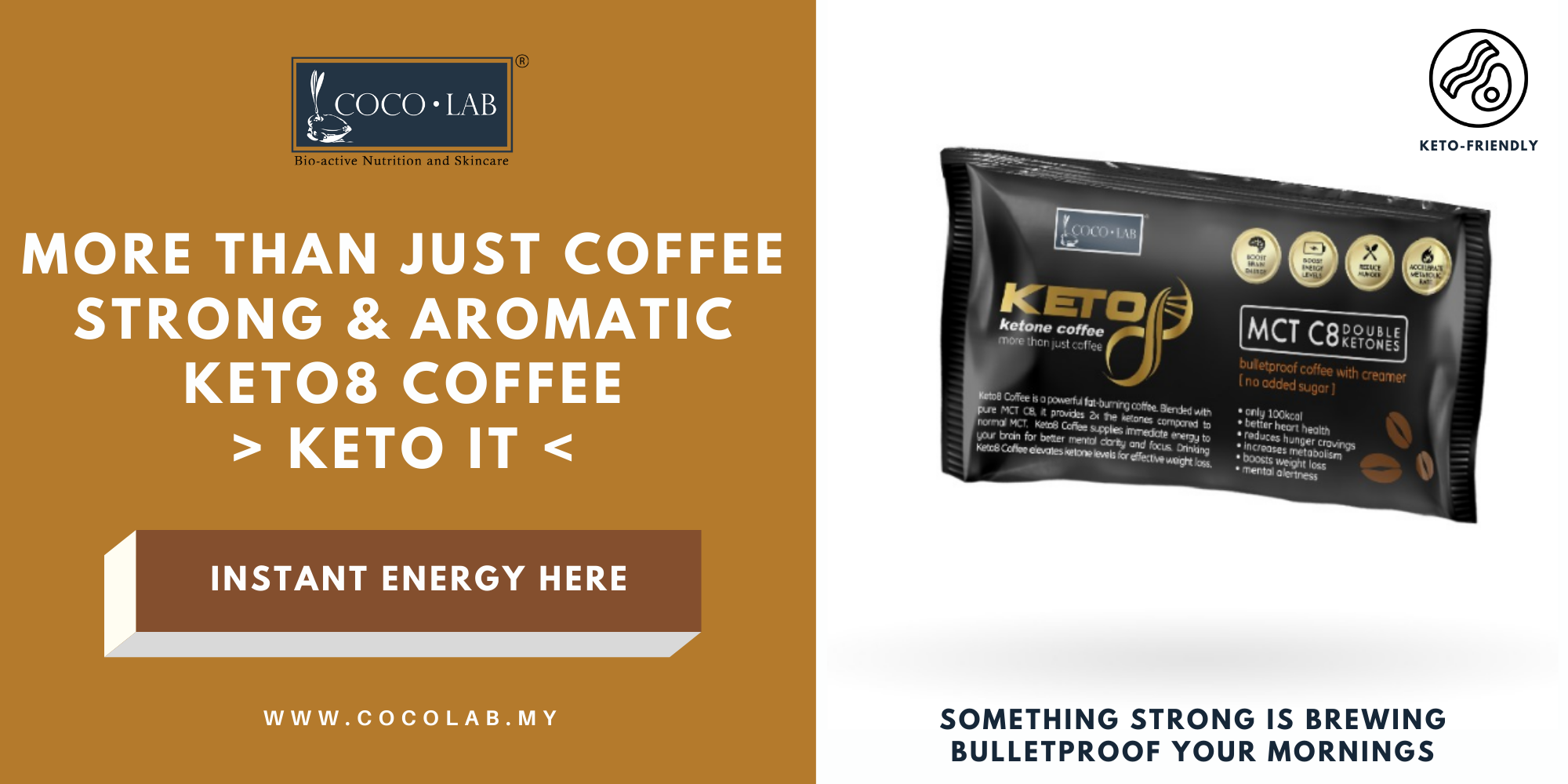 Arrange a Grab Pickup from the COCOLAB outlet!
Feb 10, 22

How Do Anti-Obesity Carotenoids Get Rid of Belly Fat?
Dec 17, 21